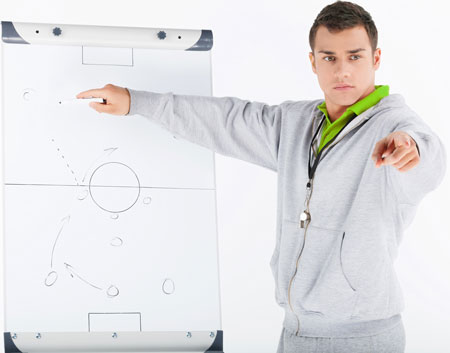 You will notice a new training method in some of these sessions. The typical practice plans, which I have used and published for many years, use a sequence of soccer drills or activities. Each session has a theme and the soccer drills are geared to that team working mostly in small groups. Within an activity there is a specific structure and players adhere to certain rules and processes.

The obvious goal of a soccer session is to train players on specific techniques and tactics which they then need to transfer into a competitive game situation.

I have noticed in the last two years that young players have lost some of their ability to retain what they learn and as a result it takes longer and more repeats before you see the results in a game. So I have been thinking of how to train my team so that they retain and apply what they learn faster. After some research and consulting with my Technical Director Carl Horton, a new direction emerged. It may seem obvious but the concept is:

Create a training environment that replicates the competitive game.

Sounds easy, but isn’t, particularly if you don’t have the space of a full field for training. I came up a new concept (to me anyways}. Use the very same drills or activities that are in my soccer practice books and use them in the context of competitive small sided games. The games have to have a field and two goals or at least one goal and an endzone/target to play to to score points. Then let the small groups play games against each other and demonstrate the focus of the game, and only interrupt and correct when the players miss opportunities to do what they need to. In addition this allows you the opportunity of coaching the topic and managing the game, like you would in a real competition. For example:

The technical topic is challenging (trapping) the player with the ball with a first and second defender. Let them play the game. If you see that the team is not getting a first defender to challenge quickly and/or not having the second defender close to the first defender, then stop the game and show what they should have done. Then restart and let them do it correctly. That is the coaching part. Game management relates to regular principles of playing. This could be using space, making runs, covering defenders, etc. Refrain from stopping the game for other technical deficiencies, like shooting technique, passing weight/accuracy, tackling, etc. It sounds easier than it is. The temptation is to want to stop a game and correct everything.

After three months of applying this concept I have seen a noticable improvement of applying what we practice in competitive games, even full field games. So it seems to work. Below are session plans starting January 2023 and I will be adding a month at a time. As I said there is a mix of traditional activities and “game only” sessions.

No comments to show.